I got a tip off from one of my blog readers today, in a comment to an earlier post, where he mentioned that Vodacom has launched Visual Voicemail for the iPhone, a much anticipated feature from the network.

With the Visual Voicemail application, you can see exactly who left a message and when they left it. All the info is right there on your screen. With one touch you’ll be able to jump to the most important messages first, or even skip messages completely.

This means you can see who left you the voicemail, without having to dial into your Voicemail service (121). You can also listen to it on the phone. 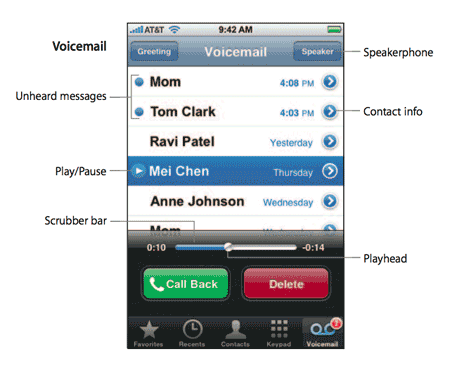 I tried activating mine earlier, but have so far been unsuccessful, and when I called the call centre at Vodacom, after 17 minutes, I finally spoke to someone who sort of knew what I was talking about

If you have managed to successfully activate Visual VoiceMail on Vodacom, let me know what you think ?To see more info about Visual VoiceMail check out the Official Apple iPhone Guide or the Vodafone Australia Visual Voicemail guide