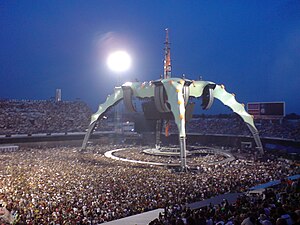 I have to admit, one of the biggest downfalls of living in sunny “Durbs-By-The-Sea,” means we don’t always get to see the world-class music acts that often tour our shores. One such act that is missing Durbs this round is the mega band U2. I have to admit, I haven’t always been a huge fan of theirs, but I would give anything to attend one of their concerts, just to say…”i was there”

The U2 360 Tour kicks off in South Africa in less than 360 hours. That is about 13 days time. The tour starts in Jozi at the FNB stadium, and then moves to Cape Town 5 days later on the 18th. You may ask why such a long break between the 2 shows, and the reason for that is because, believe it or not, it takes 5 full days to set up the stage. The stage design is pretty unique in the sense it is a full 360 degrees. So you have a round stage in the middle of the crowd. Pretty cool I think !!

The guys at Highveld Stereo in Joburg, who are the main media partners in the tour, have come up with a really cool idea to get some “gees”(circa World Cup 2010) going for the tour. They have put a specially built stage, which they will be dragging around Gauteng over the next 2 weeks, where members of the public can sing their favorite U2 song and win prizes, including tickets to the show. They will be advertising daily on their Twitter account (@947highveld) as well as posting on their Facebook page as to where the stage will be videos will also be posted to Highveld YouTube channel of the crazy peeps trying to get hold of that elusive ticket. If you would like to join in, you can use the hashtag – #U2Highveld in your tweets.

I am sure that there are going to be loads of people trying to get these tickets, so if you live in Gauteng, I keep on top of Twitter & Facebook to see where the stage will be heading next. Should be a good laugh.

[…] on Friday afternoon at about 4 o’clock I got a phone call from the guys doing the Highveld Stereo U2 campaign, which I blogged about a couple of days ago. The phone call was pretty brief, with just one simple […]