So tonight we heard all about the new iPhone4S that Apple launched at a small press briefing, with only 350 people attending. I followed the event live on the Engadget live blog, which was super awesome and kept up to date.

While many people expected a iPhone5, we got to see the new iPhone 4s, which includes a couple of cool new additions to the current iPhone. Some of these cool new features include: 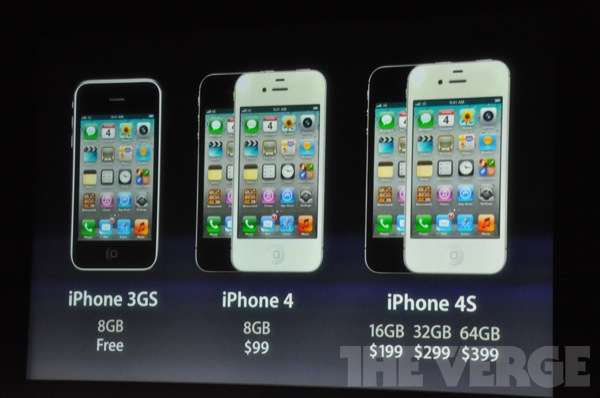 Overall, not the most exciting Apple keynote we have ever had, but I guess we will just have to wait and see how this one works out. The APPL stock also took a bit of a dive and didn’t seem to recover. The pricing does not change for the US, so hopefully our pricing should stay the same. Added to that, the iPhone 4 will only now be available in a 8GB model.
I’ll also be updating here with more news if I missed anything out. What do you think of the iPhone4S ? Lemme know in the comments below.

If vodafone uk will get in October chances are good it will ship to vodacom during the same period as well.

IF Uk get it in the uk ,can’t you just post it over , would it still work in south africa ?

My fiance is in Saudi Arabia , any idea when it releases there or in Dubai.

@JB – the Apple stores in the UK typically sell unlocked iPhones, so in theory you should be able to buy it there and have someone hop it across to South Africa. Just double-check before you hit the buy button whether that’s still the case this time around.

My take on the iPhones 4s: If the new iPhone had a new case, folks would probably not have minded. Apple improved all the things that matter in general use: speed and performance, they bumped the max storage capacity, they bumped the camera.

I think the problem with expectations was that people don’t realise how good smartphones are these days. Even looking at Android, the top end models are evolving a lot more slowly this year than they did in 2010 (where virtually every week brought a new top-end Android phone with markedly improve specs). What can you really change, hardware-wise, that would make the device markedly better? We already have a retina display, so bumping the resolution doesn’t make sense. Integrating NFC seems like a cool idea, but there is practically no use for it today. 4G coverage globally is incredibly spotty, plus it would knock the battery life. (And I’m not sure how much LTE would really help, apart from helping you burn through your data cap faster. When browsing the web, for example, the biggest bottle-neck is browser rendering performance, not whether you do 14.4Mbps or 25Mbps. And the iPhone isn’t built for downloading stuff as it is…)

A few things people wanted to see, like a bigger screen, are things that I suspect Apple just won’t do. So if the (comparatively) small screen of the iPhone is an issue for you, you’re probably out of luck and should contemplate getting a Galaxy S II and save yourself the heartache of on-going disappointment from Apple. Things like glasses-free 3D is nowhere near ready for primetime.

I don’t think the problem here is Apple dropping the ball. (I thought the keynote dragged and Apple dropped the ball there a bit, but in terms of the iPhone 4s itself, I think it’s a great product.) The problem is that smartphones have improved so dramatically over the last 4 years that, hardware-wise, they’re a bit like computers. All the necessary bits have been added, they work great, they’re truly useful as tiny little computers. The Mac’s unibody design hasn’t been changed in, what, three or four years? Every year, they just bump the specs a little. And nobody complains about that – people still buy a boatload of Macs.

The improvements to smartphones going forward will be mostly software-based. Get used to it: this exciting phase where smartphone hardware was getting better in leaps and bounds is over. Those improvements happened because (let’s face it) the first smartphones were crap. They had potential, but they weren’t actually all that good or useful. As soon as something becomes (objectively) good, even great, things stagnate on the excitement level. When’s the last time you were truly excited about a PC? That’s where smartphones are now.

Tablets are a slightly different story. They’re exciting because they’re still (objectively) rather crappy. There’s a ton of things that I’d like to do on my tablet, but can’t really do today.

So don’t be disappointed. Just start thinking of smartphones more like the way you think about a Mac.

[…] You can read the bits and pieces from my friend, Marc Forrest’s blog […]

my 5 cents worth on the matter.
the iphone 4s is awesome IOS5 is awesome but to delay it by six months and the phone looks the same and the biggest improvement is the software inside is the problem. after six months of cloak and daggers and not much has changed they shot themselves in the foot with that. they should have just released the specs in june/july and said that there is a delay in production. it would have managed the markets expectations of the product launch better.
apples biggest mistake was not managing the market expectation this time round.

In your opinion, are these deals good value-for-money?

For context, I currently have a Nokia 6760 and use 60-80Mb a month, though I expect my usage to increase with an iPhone. My phone is mostly used for browsing, email and occasional streaming and downloads (again, I expect to do more of this with an iPhone).

@Odette personally I’d wait for the iphone 4s (as these prices above should drastically come down when the iphone 4s arrives), but should you really want the iphone right now… mtn has it much better priced. Vodacom are pricing themeselves out of the market currently. And the “quality” service is no excuse for it. If you want a phone equal to the iphone 4s right now, then the samsung s2 is the phone to have.

Thank you for the feedback. I’ll rather wait for the 4S then. I’ve waited this long to get an iPhone so another couple of months won’t hurt me. :-)

@Odette Regarding your data usage, it will probably increase. I use about 110MB per month, and that’s because I’m extremely careful with my twitter usage, using Wifi as often as possible. Having access to a good email client will also tempt you to access your emails, which consumes copious amounts of airtime/data. Fortunately, the VOdacom data bundles are relatively inexpensive, and eay to buy on the go. Also, keep in mind that data usage varies greatly from person to person.

I did’nt read the package details until now, but remember that (depending on whom you are contacting), more of your communication might now use data (via Whatsapp, iMessage, Email etc.) as opposed to calling minutes and SMS.

mmmmm….thanks to all the guys sharing the info! very enlightening as im also considering switching from BB to iPhone. Will wait for the 4s to become available! THanks

You’re right about the data usage. I’ve already prepared myself for using much more data than I do now. I rarely make voice calls or use any IM app – mail, browsing and SMS are much more important to me.

spoke to an MTN rep ystday and he tells me their warehouse say they’ll only get the 4s in January :(

I really did like the iphone 4, didnt get it because of the antannae issue. I am definitely going to buy the 4s. i have used the galaxy 2s and i must say that the graphics are not as smooth as any of the previous iphone’s.

How many gig is it

Shame poor shiren……missing her….. Im sure you can get it unlocked. lets try armand…. call me

When do your guys thing we will receive the Iphone 4s been waiting so long. Been reading blogs and there’s allot of roomers saying we will get it b4 Xmas.? what do U think?

Question for you: if I buy the iPhone 4S in the US will I need to jailbreak it / use a gevey card or will it work on MTN.? Thanx

I’m a first-time Apple Iphone buyer, but I have been using a Imac for the last 5 years and its been nothing but brilliant. I’m petty sure ill be happy with the new I phone 4S.

My question for your guys:

I I’m planing to buy the Iphone 4S unlocked in the US, will it work fine here in South Africa, I know apple unlocked dose support GMS networks, which is MTN and Vodacom. But not sure if my internet will work.

Can someone maybe give me some advice?

I would strongly advice you not buy the iPhone 4s in any country that you don’y leave in. Siri America wont work in S.A.

They need to format SIRI according to the Countries’ locations.
e.g The SIRI voice in America is a woman and in the UK is a Man and they can’t change that. We still don’t know what voice the south Africa will be.

Firstly, you said that you dont like it, i just want to know the reason behind that. I am interested in buying it from you, but need to make sure that it works perfectly. 7500? Since i guess you have used the phone, cant you drop the price down cos it is a 2nd hand phone already, and anything can happen.

marc can i buy iphone 4s on bid or buy cheaper or what are teh implications?

cheaper to buy iphone 4s on bid ot buy or what are the implcations?